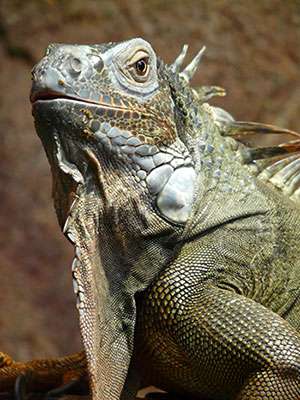 The green iguana (Iguana iguana), also known as the American iguana, is a large, mostly herbivorous lizard and is considered an invasive species. Large feral populations exist in South Florida.
Female iguanas lay 20 to 71 eggs once per year during a synchronized nesting period. The female green iguana gives no parental protection after egg laying, apart from defending the nesting burrow during excavation. The hatchlings emerge from the nest after 10–15 weeks of incubation. Once hatched, the young iguanas look similar to the adults in color and shape, resembling adult females more so than males and lacking dorsal spines.

Juveniles stay in familial groups for the first year of their lives. Male green iguanas in these groups often use their own bodies to shield and protect females from predators and it appears to be the only species of reptile which does this

Danger to Property and Ecosystem

Due to a combination of events, the green iguana is considered an invasive species in South Florida and is found along the east coast, as well as the Gulf Coast, from Key West to Pinellas County. The original small populations in the Florida Keys were stowaways on ships carrying fruit from South America. Over the years, other iguanas were introduced into the wild, mostly originating through the pet trade. Some escaped, others were intentionally released by their owners; these iguanas survived and then thrived in their new habitat. They commonly hide in the attics of houses and on beaches. They often destroy gardens and landscaping. They seem to be fond of eating a native endangered plant, Cordia globosa, and feeding on nickernut (Caesalpinia) a primary food plant of the endangered Miami blue butterfly (Cyclargus thomasi bethunebakeri); additionally on Marco Island, green iguanas have been observed using the burrows of the Florida burrowing owl (Athene cunicularia floridana), a species of special concern, all of which can make them more of a serious threat to Florida's ecosystem than originally believed.

Green iguanas have very sharp teeth that are capable of shredding leaves and even human skin. They cause damage to residential and commercial landscape vegetation and are often considered a nuisance by property owners. They may also cause damage to infrastructure by digging burrows that erode and collapse sidewalks, foundations, seawalls, berms and canal banks.

Hawkeye in the U.S.