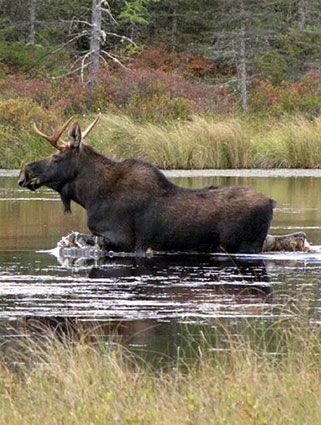 This horse-sized animal is the largest member of the deer family with long, dark brown hair, high, humped shoulders and long legs. A pendant of hair-covered skin reaching up to 2 feet hangs under its throat. Each April the male moose (bull) grows a set of antlers reaching 120-150 cm which he loses in the winter after rutting season. Moose vary in size and shape. Their colour varies from a little brown to a dusty black depending on the season and age of the animal. Calves, in comparison, are often a light rusty colour. 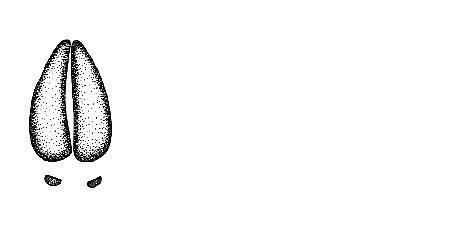 The moose track is slightly larger and more pointed than that of the elk and similar in shape to a deer's but twice as large. The track may be blunted if the ground is rocky and hard, making it more difficult to distinguish from the elks. A typical print is of two pointed pear shapes with the tips closer than the wider bottom.

Moose Damage
Moose cause damage to landscape plants when winter snow makes it difficult for them to reach their normal food supply. Where moose come in close proximity to dwellings and manicured landscaping, they will eagerly browse ornamental trees, shrubs, many types of flowers, and vegetable gardens. One sure way to determine if moose are causing damage to ornamental plants is to observe the animal in the act, but if the damage occurs unknowingly, a close examination of the damaged branches will help you identify what is responsible.

The presence of droppings, tracks, and the location of the damage caused by moose is unmistakable. Twigs browsed by moose show a rough, shredded tip, and a square or ragged break. Other species of wildlife, such as gnawing rodents and snowshoe hare, leave a sharp clean cut and the tooth marks are often visible.

Please note that, in contrast to almost all other Ontario animal control operations, as a licensed furbearer trapping company we are able to employ all of these control methods INCLUDING relocation or permanent removal of captured moose.

Moose Breeding
The rut lasts from early September to late October and 8 months later 1-2 calves are born. New born calves weigh around 15 kg but quickly increase in size, around 300 or 400 pounds by its first winter.