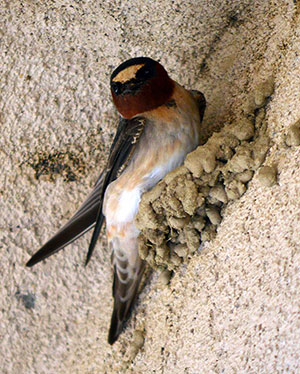 Cliff swallows can be a major nuisance in suburban areas due to their nesting habits. The mud nests damage and deface the outer walls and eaves of residences and office buildings. Building sides often end up smeared with feces from the bird colony along with collecting on the ground. Parasites have been known to enter the building through cracks next to the nests. The number of cliff swallows has been dwindling but currently they aren’t listed as an endangered species but like all other swallows they are still a protected species to ensure they do not get onto this list.

What Hawkeye can do to help?

Since cliff swallows enjoy special protection under the law, only a permitted company like Hawkeye can provide effective pest solutions. The main type of preventative control we offer is Falconry and birds of prey to instil instinctual fear in the swallows to encourage them to nest elsewhere. We will also remove any nests that are not completely formed. A good way to eliminate cliff swallow problems is to take down the nests in the winter while they are gone and exclude them from returning using exclusion netting. Hawkeye can perform these services for you and provide a customized plan to solve your problem. Contact Hawkeye today at 416-429-5393 for all your swallow control needs.

Cliff swallows are slender, sleek birds well known for their long migration. Cliff swallows spend their winters in South America and summers in North America. They arrive in or around April and they are very territorial. They will always attempt to come back to the same nesting site year after year. Cliff swallows are infamous for mixing in with other species of swallows, similar to what terns do with a flock of seagulls. But as long as there is a flat face for them to make a nest and a nearby source of water there habitat can be quite diverse. You can find them nesting not only on natural cliffs but bridges, buildings, and other man-made structures have proven to be a preferred nesting spot now for cliff swallows.

The cliff swallow is easily identified by the large white marking on the front of their crown right above their beak. Their head back, nape, and neck resemble the colours of a barn swallow with an iridescent blue crown and burnt orange nape and neck. The rest of their bodies are quite drab with a whitish beige breast, belly, and rump as well as a white stripe extending to the lower nape of the neck. They also sport an iridescent blue and white patching mantle and brown wings and tail like that of the bank swallow. Also similar to the bank swallow, these swallows have a very short tail which is not very distinctive.

The cliff swallow has made a very successful switch from cliffs to manmade structures for nest placement. Increased insect population from modern agriculture and shelter created by manmade structures are two reasons given for this transition. The cliff swallow now faces strong competition from the introduced house sparrow for food and shelter. This may be why their numbers appear to be dwindling. Swallows build elaborate nests out of mud pellets. The cliff swallow packs mud pellets in the upper eaves of a building. The resulting nest will resemble a wine carafe or flask with the opening on the side. They line the nest with grass and feathers. Nests are packed together in close knit colonies. The colonies range in size from a few to several thousand. Breeding Cliff swallows have two broods per year with each brood containing four to five eggs. Egg coloration will be white, cream or pale pink with brown spots on some of the eggs. The eggs take 12 to 14 days to hatch. Fledglings leave the nest after 25 days.