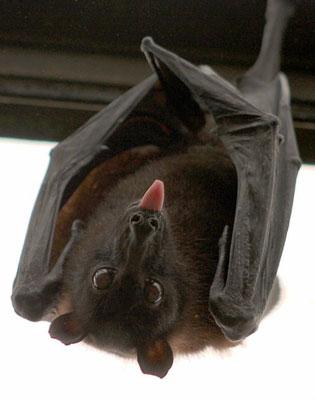 Nineteen species of bats have been recorded in Canada, and 17 of them are regular residents. In many ways, bats are typical mammals: they are warm-blooded, give birth to live young and suckle them. Their ability to fly sets them apart from all other mammals.

An average-sized Canadian bat, the little brown bat Myotis lucifugus, weighs about 8 g in summer (the mass of two nickels and a dime) and has a wingspan of about 22 cm. The hoary bat Lasiurus cinereus is the largest Canadian species, weighing about 30 g, with a wing span of 40 cm. At about 5 g, the smallest are the eastern and western small-footed bats (Myotis leibii and Myotis ciliolabrum, respectively).

Their wings are folds of skin supported by elongated finger, hand, and arm bones. Wing membranes attach to the sides of the body and the hind legs. In Canadian species, the tail is enclosed in the membranes. Resting bats usually hang head downward so that taking flight means just letting go. Bats are primarily nocturnal creatures, sleeping during the day and hunting and feeding at night.

Evidence of bat activity may first appear as a brown stain on the ceiling or walls of a dwelling, and an accompanying musty, urine-like odor. If the attic or crawl space can be examined, live bats may be observed flying or roosting on the walls or beams. If no bats are present, the area should be examined for droppings.

Human-bat conflicts most commonly result when bats use human dwellings as habitat. Bats rarely attack people, but can transmit two diseases, histoplasmosis Histoplasmosis, a fungal disease that can cause a flu-like illness, and rabies. Bats may also cause considerable damage to crops and fruit orchards.

Please note that, in contrast to almost all other Ontario animal control operations, as a licensed furbearer trapping company we are able to employ all of these control methods INCLUDING relocation or permanent removal of captured bats.

Most of the mating occurs before hibernation in September. The females store sperm in the uterus over the winter; ovulation and fertilization occur when the females leave hibernation in the spring. Each female bat gives birth to a single baby, born 50 or 60 days after fertilization, in the middle of June. Little bats grow rapidly, increasing their wing area by 10 times in three weeks and starting to fly by the age of 18 days. At this stage, they have shed their milk teeth and begun to eat insects as well as their mothers’ milk.