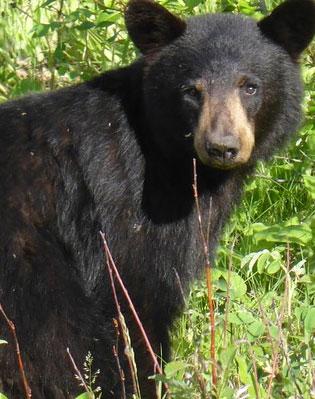 The North American black bear is the best known and most widespread of the North American bears. It is of medium size among bears, averaging 135 to 350 pounds, although individuals over 600 pounds have been found. Adult black bears, standing slightly over 3ft. at the shoulders, have a predominately black coat which is smooth and short haired, compared to the brown bears. There are, however, also a number of well defined color variants: chocolate-brown, cinnemon and a silver gray tending to off-white. Smaller than brown bears, the black bear is an agile climber, even in adulthood.

Black bears are alert creatures, with a highly developed sense of smell, exceptional hearing but apparently only average eyesight.

Identification
Typical coloration in Western Canada is black to cinnamon with a white blaze on the chest and black in Eastern Canada. The snout is tan or grizzled with a straight or slightly convex profile. Damage attributed to a bear can be verified by actually seeing a bear cause damage or by other on-site evidence of a bear's presence (tracks, feces). 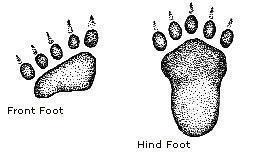 Please note that, in contrast to almost all other Ontario animal control operations, as a licensed fur bearer trapping company we are able to employ all of these control methods INCLUDING relocation or permanent removal of captured bears.

Bear Damage
Most bear damage is seen in agricultural settings; crops, orchards, bee hives, livestock, and structural damage to outbuildings. Forestry and logging industries also see a fair bit of bear damage; large sections of bark are stripped from trees and lie around the tree bases. The exposed sapwood has long vertical grooves left by the canine teeth during feeding. Some debarking may be found in the crown, but most feeding is confined to the lower main stem. Urban bear damage usually involves waste disposals, composting sites, and landfills.

Bear Breeding
Bears breed during the summer months, and males cover large areas searching for females. Bear cubs are born in early January/sometimes February and are relatively undeveloped and small at birth, being only about eight inches in length. Two is the average litter size, but three are more common than one. Mother and cubs emerge from the den by mid-May, and the cubs begin learning about life in the wild.